Girl needs to get some Toronto shoes

Now this is the story all about how my life got flipped, turned upside down. And I’d like to take a minute just sit right there, I’ll tell you how I became the …..eerrrr princess of some new Michael Kors pumps from Browns.

Looking for flats can be boring. I get easily distracted and go for shoes that I’d normally never wear: heels. But looks like I managed to purchase them yesterday while shopping in Toronto with Leanne.

It was towards the evening and we were most definitely tired out from the hours upon hours we were walking around doing a bit of shopping. I spotted a pair of cute shoes in the Browns store window, and it lured me in. Which is where we ended up for a good 90 minutes from there on.

Michael Kors makes some of my favourite shoes. I have a pair of nude flats by him that I bought a few years ago and the bottoms of them don’t even look worn in. I’d show you them, but I have misplaced one of the shoes all summer long. It’s gotta be somewhere in my apartment.

As I mentioned, I spotted some the pressley cap toe heels by Michael Kors and asked to try them on. They were comfortable. So nice, and in my price range. I was surprised at the price of them because my flats were much more than that a few years ago.

Since they fit my feet like glove, and I didn’t need heels â€” I was mulling around the store trying to decide when/where I’d wear them. To justify the price of buying heels over flats. I blame Lena’s blog post.

Currently I’m rocking a pair of flats that are in dire need of being replaced. Hoping no one would notice, I slid my payless $15 shoes (with a minor hole in the toe area) under their couch. I thought they were pretty decent, until the sales associate men saw at what I was doing with my shoes. They jokingly told me they were a wreck. It was all in good fun. But they’re so comfortable compared to ANY other pair I own.

I asked one of the two sales rep who came over, to help me pick out some flats. He ended up grabbing me these leather loafers, which I called old man slippers from the 80s. You know the one’s I’m talking about, right? Gotta say, I give them props for comfort, but it was definitely out of my comfort zone. That or you don’t like change, one or the otherÂ â€” one guy said. Haha! The jokes from us all, kept flying left right and centre. We were howling at the disgrace of my old flats. We drew so much attention that another sales guy came over to see what was on the go.

My stomach hurt from all the belly laughs and huge roars coming from all four of us at the store. The second sales assistant piped up and suggested I get the heels over the flats. Plus the heels weren’t even that high and told me they were kitten heels and I neednâ€™t worry about the heigh of them. I was a tad insulted since I think kitten heels are those tiny pieces of chewed up gum stuck to a bottom of the shoe for a bit of lift.

These shoes are full on CATS. Not kitten heels, boy. Like baby stilettos in my wardrobe. I loved them. I mean, just look at them. Classy, with a small sexy heel.

Leanne said I could wear them to the BlissDomCa conference coming up this week.

A blogging conference, though Leanne? I asked. I thought it would be best to wear flats there.

The sales associate asked if I was a legit blogger. Of course man! I ain’t fakin that stuff. I have a real blog. Even got a button to show for it. Want one?

I gave it to him, and he pinned it onto his suit. OMG you didn’t just do that. This must be documented and put onto my blog. I’m surprised the photo isn’t blurry due to us all laughing. 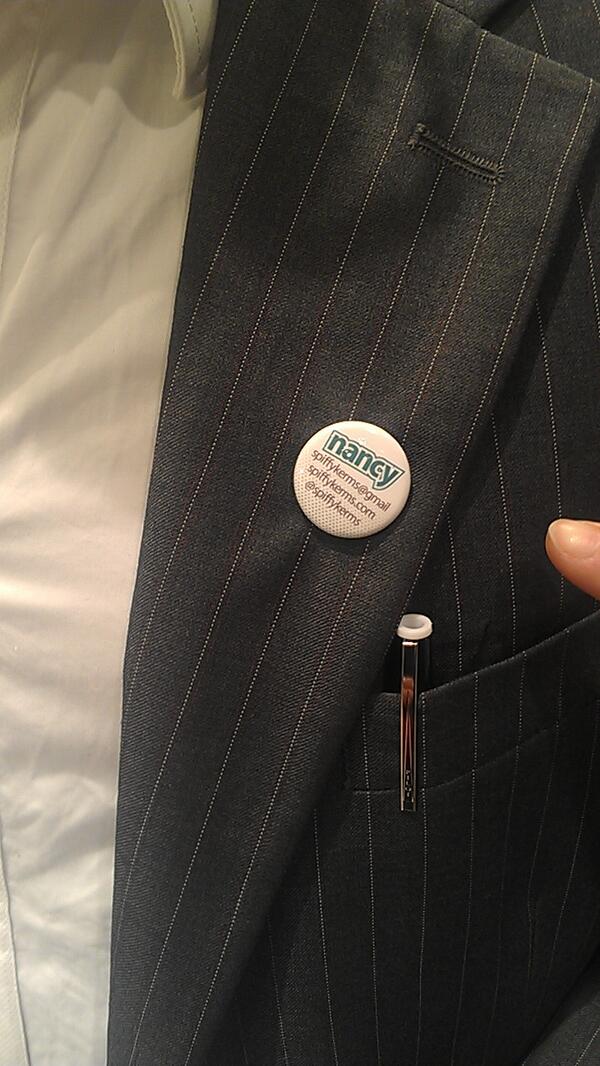 He wore my button around the store for a while. Then, I insisted I look further at flats. That’s when sh*t got real. I tried on the quilted ballet flats. I swear I was on aÂ  Michael Kors kick yesterday. That and the men we’re both set in getting me a new pair of new shoes that didn’t look worn out. One looked down a my old pair and said Gorrrrl where are you from? Due to the friendly nature of my personality I asked him if he wanted in depth details of where I actually was from or if he wanted to know what city I lived in now.

Yesterday. Nancy, tell me where you lived yesterday.

Waterloo, I answered with a laugh.

Gorl. You got some ugly ass shoes. Look at them holes in the toes. Those are Waterloo shoes. You need yourself some Toronto shoes now! As I step on them to cover them up while I bend over snort-laughing hysterically in the quiet shoe store. Trying to cover up my comfy flats. He said I was workin’ those heels. I’m fun, and different because I’m the one wearing heels while everyone gets ready for winter by buying boots. If my new pumps look broken in, they probably are at this point since I had them on for a good hour in the store.

Fine. Give me some boots to try on. But I don’t need them, and won’t buy them.

He must’ve thought I was a Michael Kors girl at this point. As this was probably the 6th pair of shoes I tried on at this point. Cowboy boots!? No. While I chuckled.

He called them riding boots, and I said yes but the logo is in the same place as spurs would be. I’d feel like a cowboy man!

I hate horses (a lie lol)

I jokingly explained if the logo was up by the calf I’d like them way better. Sure enough, MK makes one like it. Of course he brought it to me.

It was one hysterical evening at Browns Shoes last night. The sales associate tried to get Leanne to convince me on buying them. But I said “she doesn’t even know me”. Which was a sarcastic joke but half-true since I’ve only met her in person twice. I told them she was some random I met on the internet. LOL

I admit now that my black payless flats are getting a little old quickly. I bought them last year for a measly fifteen bucks. I’m in denial that they’re on their way out because they’re SO comfortable. But it’s a good thing Lena is having a Twitter Party on Tuesday for Brown’s Store, with six $100 gift cards up for grabs. So if you’re around, join in on the party. I already know what shoes I’ll be buying if I win a prize.

90 minutes flew by and at that point I was sure I wasn’t going to buy any shoes because I loved the heels more than the flats. But I needed flats, and I was getting confused! What ones to buy?! I hmm’d and haw’d about buying and finally ended up going to buy the heels and somehow my freaking credit card got declined for the first time in my LIFE. The guys walked over to see what the issue was. They continually joked and made fun of me saying it was because I’m from small-town Waterloo using a PC financial master card as their store only accepts big bank ones. Called up my CC company and they just suggested I try another till. Thankfully it worked and that was the end of that.

I don’t know how I manage to get into these types of situations where I’m laughing so hard that my face and stomach hurt and stayed for over an hour at a shoe store! Too funny. I thanked the guys for such a fun shoe shopping experience and off we went.

How many pairs of heels do you own?

Do you own any “designer” shoes?