I feel like IÂ haven’t truly sat down in ages and told you what we’ve been up to. I’d like to think the lack of blogging meant that I’ve been having the best ol’ time, with not much computer time, and that I have.

Pop on my red and white outfit for Canada Day, then a few days later add a bit of blue to the outfit and you have my Independence Day outfit. Celebrating our second Fourth of July here in America was pretty wicked, I have to admit. I ended up doing a 4th of July vlog on my YouTube channelÂ and in case you weren’t awareÂ I upload them every Monday and Wednesday!

For the week I am reviewing the Mazda CX-5 crossover SUV and so we took full advantage of my husband having a four day weekend and using the review-car’s mileage to explore California a bit more, with just the two of us in tow.

So, let’s play catch-up on our weekend together. It’s been a long time since we haven’t had visitors on a holiday/vacation day for my husband, so it was really nice to be able to spend the time with him, solo.

On Thursday, the Mazda CX-5 was delivered right before lunch and we immediately hit the road just moments after having the keys handed over to me. 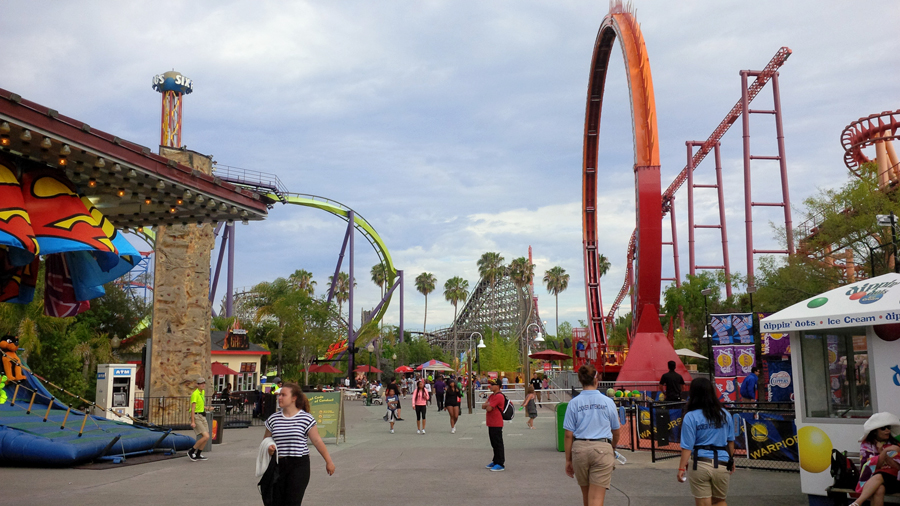 I drove us both up north to Vallejo to go to the Six Flags amusement park to ride roller coasters until we got ill. Seriously, I cannot handle it any more. It’s not even the fact we went on spinny rides, because we totally didn’t. I think my stomach simply can’t handle the cork screws in some of the rides. Needless to say, I definitely had to sit down for a good half hour at one point to let things settle. Call me stubborn, but I didn’t let a little nausea stop me from havin’ a good time at the amusement park! I also didn’t realize Six Flags is somewhat of a zoo (literally speaking) because we saw penguins – they are tiny little fella’s, and some stinkin’ cute too man.

As per usual, a good recovery food after a long day at the amusement park, calls for a feed at McDonalds. Hooboy! So tasty.

Friday morning my husband had a cycling-date set up with a friend of his in Santa Cruz bright and early in the morning.

Rather than him getting up at 6am to bike down there, I offered him a ride. Alfie came along with us this time, since I wanted to take some photos of the new vehicle I was in for the week, and of course stop at the Mitchell’s Cove Beach, the off leash dog beach again.

Admittedly, Alfie is getting pretty comfortable with being on this beach as we’ve got a number of times already (see the YouTube video of us, our first time visiting), so he was prancing and marching aboutÂ bossing all the humans and dogs around. I’m not sure if people were fed up with him barking, but I certainly wasn’t havin’ him bark the entire time, so I ventured off into a more quiet area of the beach and let him calm his nerves.

Such beautiful views! I love this place.

Since my husband was going to be in the Santa Cruz area biking for a good 6+ hours and didn’t require a ride home, I drove back up to Santa Clara area and decided to check out the Santa Clara University campus for the first time. I’ve driven past theÂ school many times, but haven’t stepped foot on their grounds.

So what better time to explore, than on a holiday weekend when school is out and there isn’t much foot traffic. You can see more photos of the campus in my last Pomeranian FridayÂ post.

On 4th of July I then drove us to San Francisco to check out the Madame Tussauds wax museum and then watching the foggy fireworks, we popped into Boudin to warm up our bodies. Because what a chilly day you guys!

I feel like San Francisco in July can be awfully chilly if you’re not dressed for the weather. Think, Newfoundland weather forecast â€” you can expect any type of weather any time of day, and that’s the same with The City.

Have you guys ever been to a wax museum? My husband hadn’t before this trip, and I remember going to the London England one back in 1998, but the only wax figures I remember spotting was the Beatles, I suppose â€” it’s that long ago. But it was really fantastic checking out this one. I am going to take a while guess and presume that they rotate their wax statues to keep people coming back. Because, when I searched the #MTSFSelfie hashtag on Instagram, the beatles, and other Lady Gaga statues were there too – that I didn’t end up seeing. So I’ll definitely have to go back a second time in a year or two, to see what else they have on display!

We’re letting the cat out of the bag

I don’t have to be at work until 9:30am, so my 15km commute to work in the mornings is usually stress-free due to the hustle and bustle of traffic and parents bringing their children to school has passed.

Most mornings I leave the house with just enough time to get to work. When I’m feeling extra peppy, I leave shortly after 9am, pop into Starbucks and take my sweet-ass time driving along sipping my peppermint white mocha, often driving under the speed limit and enjoying the fall weather. Driving through one of the local parks is my ultimate favourite part of the morning commute. Especially when the sun peaks through the orange and yellow coloured leaves. Even better when I have a delicious hot drink on hand.

However, the commutes aren’t always a joy. Last week I encountered someone who raced to get to the same street I was about to turn onto. Seeing that I was closer to the turn, I ended up in front of her. Which was unfortunate for her because I was in one of my grandpa-driving moods. Going 45 in the 50 zone. I didn’t really notice her behind me for a while, until she started driving uncomfortably close to my bumper.

One of my pet peeves. But it didn’t seem to bother me. I think the caffeine and the 7+ hours of sleep had me in a state of euphoria.

At least my head wasn’t hanging out of the window singing along.